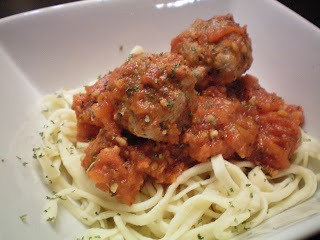 ﻿﻿ I started this project because I wanted to try an Italian sausage recipe with ground turkey. Unfortunately, the sausage came out poorly and I ended up eventually throwing it away. After the failure, I had some left over meat so I decided to try to make some meatballs. I did not want to use egg because I wanted a lower fat meatball and the turkey did not need extra moisture. The meatballs needed a sauce to live in so a red sauce is where I went.
The sauce was created with the season and taste method. It is very important to taste what you are cooking before you serve it and when you are cooking from scratch without a recipe then it is even more important to taste as you go. This is of course as long as what you are cooking does not pose a risk if eaten raw. You do not want to taste a raw piece of chicken since it is widely accepted that raw and undercooked chicken poses a health risk. Meatballs and sauce is a great meal but really needs to be enjoyed on a roll or noodles. I chose noodles.

For the noodles, I used a basic pasta recipe that works with one cup of flour to one egg and a half tsp of flour. Since I do not have a dough roller, I could not make spaghetti so I rolled out the dough on the counter and cut into long strips with my pizza cutter. My pasta ended up being closer to a thin fettuccini a thicker ribbon than linguini though they were not uniform with some thicker than others. The pasta noodles were great. They were not heavy like pressed noodles are. Cutting the noodles was the most time consuming part of the meal.
I was able to make this meal in about an hour and a half of constant cooking because I was not prepared and I made things out of order. If I would have started by making the pasta dough, then started the sauce followed by the meatballs, and then finish the pasta I think the time could be cut down to under an hour.

Coarsely chop tomatoes and add to saucepan with other ingredients. Heat to a simmer and let simmer for at least 30 minutes stirring occasionally to allow flavors to meld. (If adding meatballs, can add them after first 20 minutes of simmer.

Measure dry ingredients into a food processor with metal blade attachment and pulse two times to combine. Add eggs and process for 30 seconds add water if there is flour that has not combined into the dough. Divide into 4 equal sized balls and let sit for at least 5 minutes (may be covered in plastic rap and saved for 3 days.) Roll out each ball to a thickness of 1/8th inch cut as thin as desired with knife or pizza cutter. (Can use dough roller with cutter head to roll out and cut dough). Drop cut noodles into well-salted boiling water and cook until desired tenderness. Well take less time to cook the noodles than does to cook dried packaged noodles. Uncooked noodles can be well floured in a freezer bag and stored in freezer for up to a month.
Posted by Just Dorkin at 2:36 PM