There comes a time in a man’s life when normal mayo out of the jar just ain't gonna cut it. That is where you start to add some extra ingredients. This mayo I put together to go into a turkey, artichoke, and homemade mozzarella sandwich. The herbs blended perfectly like the mayo was made just for the sandwich. Which of course it was.

Email ThisBlogThis!Share to TwitterShare to FacebookShare to Pinterest
Labels: Lunch 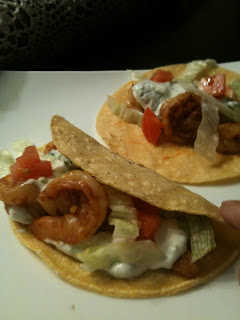 There is a lot that you can do with shrimp. Anyway that you can season chicken or you can season like any other seafood.  In our household we are partial to the Cajun grilled shrimp but I wanted to try something different.  So I went to google and typed shrimp and the first thing in the drop down was shrimp tacos.  Shrimp tacos was something that I had not heard about but it did look tasty. So I decided to make it.  The recipe I picked out came from the site called life's ambrosia. The recipe was a nice simple meal with few ingredients.  instead of sour cream I used Greek yogurt.  The flavor of the shrimp had a great spicy southwest flavor and the meal only took 30 minutes to make.  Check out the site as it has alot of other great recipes.
Posted by Just Dorkin at 10:47 PM No comments: